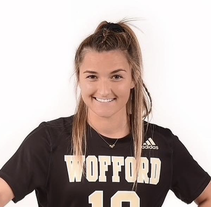 Coach Emily Beckman was a four year varsity player at Apex High School. Coach Emily helped the Cougars to four conference championships and made the 2016 All-Conference Second Team and the First Team in both 2017 and 2018. She competed in the 2016 Powerade State Games and was selected to the All-Metro team in 2017 and 2018. At Apex she led the conference in assists in 2017 and 2018 and was ranked No. 13 nationally in assists. She broke Apex High’s record for points in a game (10) and finished with 75 goals and 145 assists in her career. As a Wofford terrier, Coach Emily appeared in 16 games her freshman year, starting in two. She scored six goals and dished out six assists with a shots-on-goal percentage of .800.